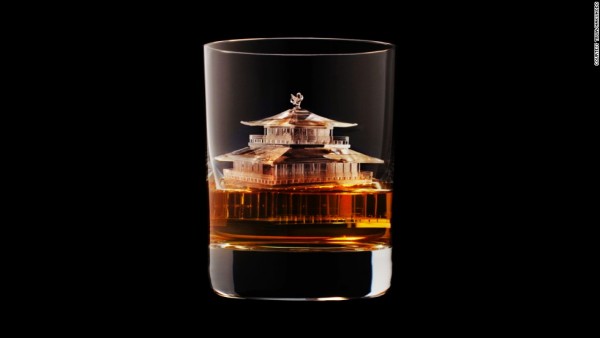 Awhile back, we spotted a beverage trend that shows little sign of slowing down. Curiously enough, it centers around one of the most abundant elements on the planet: water. More specifically, it focuses on elevating ice to the level of artistry.

One of the clearest examples of this trend is last year’s superb Suntory campaign, which depicted intricately laser-etched ice sculptures in tumblers of golden whisky, a technological feat that is only possible in an era of rampant 3-D printing. But Suntory wasn’t the first brand to elevate ice. That happened as early as 2012, when Virgin Atlantic Airlines started serving first-class ice formed in the likeness of its founder, Sir Richard Branson.

We’ve also spotted many other instances of ice becoming a signature of sorts. There’s the rise of so-called “artisanal ice” being served (for an upcharge) at some of Manhattan’s toniest watering holes. The main attraction here is the ice’s unusual clarity and its slower melting rate, making it an ideal addition to the craft cocktail maker’s repertoire.

But, while all those examples are largely about raising the aesthetics of ice, there’s a parallel movement to tinker with its functionality. Bartenders have begun to experiment with flavored ice’s capability of transforming a cocktail over time. We’ve either tried or heard tell of clinking toasts sporting ice of the following varieties: ginger-apple, cinnamon, grilled lemon, dried chili, coffee, lavender and more. And interest in flavored ice has rapidly crossed over from venues to consumer how-to blogs and articles.

Finally, there’s a whole wide world of ice trays for sale, in nearly every shape imaginable. From the Titanic stuck on an iceberg to the Death Star to endangered arctic animals on their own ice floes, there’s almost no shape so outré that it’s not available.

What’s the lesson for marketers in all this? Well, one thing’s clear. (See what we did there?) Even the most overlooked or expected detail can be lifted to the value of high art, thereby boosting purchase value. But there’s also an underlying wisdom. It’s the simple truth that, as humans, we love to play with our food. Any campaign or packaging or experience that harnesses that insight is unlikely to disappoint.